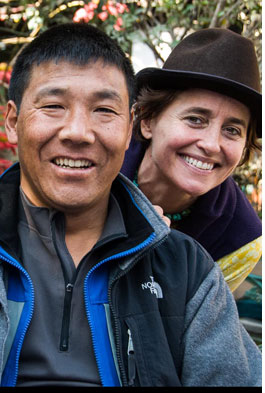 Dawa Sherpa is an ethnic Sherpa and was born in the Everest region in the village of Lukla. He began working for trekking and expedition companies when he was a young man. Over his twenty plus year career he worked as a climbing guide on major Himalayan expeditions (including Mt Everest).

He is highly regarded by clients, peers and staff alike. For more than ten years Dawa has been working with non-profit organizations and charitable foundations helping organize and run charity challenges in the Everest and Annapurna regions with groups sizes ranging from 16—60.

Dawa has also been in charge of building three schools in remote parts of Nepal and there are more planned. In partnership with Classroom in the Clouds Dawa helps oversee the schools’ human resources, including the selection of the school’s teachers and the administration.