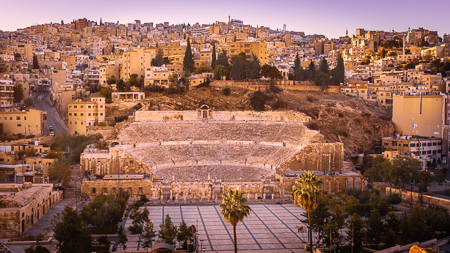 For millennia Jordan has been a land of empires including the Kingdoms of Israel, Babylon, Persia, Roman, Byzantine, Crusader Kings, and Hashemites. We travel across the surface of this complex history on foot and bicycle while focusing on the natural landscape.

Our cycling will take us across green valleys, deeply cut sandstone, sections of the Jordan Trail amidst the remnants and ruins of these ancient empires. On foot we explore the northwest route into the massive stone Nabataean site of Petra, the unique flora and fauna of the Dana Wildlife Preserve, and the vastness of the open desert at Wadi Rum.

For more remote excursions, four-wheel-drive vehicles take us into the desert to sleep in upscale tents beneath star-filled skies. Near the end of our trip, we hike up a riverbed to a waterfall and float in the saline waters of the Dead Sea.

Join Jock Montgomery on this multi-sport adventure that combines natural beauty, cultural experiences, and local cuisine amidst a legendary desert landscape that should be filled with a plenitude of spring wildflowers. 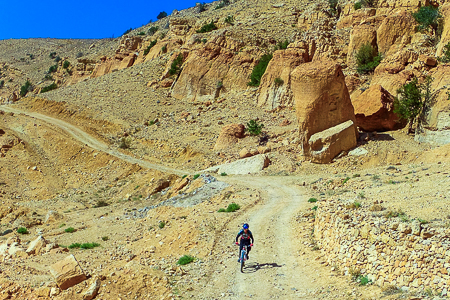 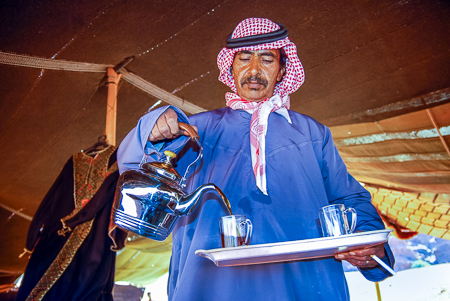 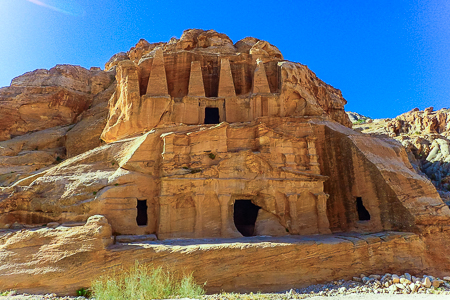 We make every effort to keep to our plans, but we also remain flexible so we can adjust to unexpected problems and take full advantage of opportunities as they arise.

Please note: three meals a day are included in the trip cost except on the first day, only dinner is included, and the last day, only breakfast is included.

The first day, we will meet at 6 pm at the Art Hotel for an informal gathering. After reviewing the details of the trip and answering any questions, we head to a local restaurant for a welcome dinner.

The Art Hotel is located in the historic center of Amman near the Umayyad Mosque, the Amman Citadel, and Temple of Hercules known for three enormous fingers reaching out from the ground—a remnant from one of the largest marble sculptures ever created.

After breakfast, we transfer to Mount Nebo from which Moses purportedly viewed the ‘promised land. During the Byzantine era this hilltop became a pilgrimage site. Today, remnants of the era are seen in excavated mosaic floors. We take in the panoramic views across the Dead Sea; if the day is clear we may even see Jerusalem 45 kilometers away.

We have a short transfer to our bicycles to start our first ride. We cycle west on a narrow and hilly road that takes us to the ruins of King Herod’s palace, where John the Baptist was imprisoned and beheaded. At the nearby village of Mukawir we will be hosted by a local family for lunch — a great opportunity for genuine local interaction.

Back on the bikes, we continue downhill for 1,000 meters to the Dead Sea—the lowest spot on earth. Do not be intimidated by the length of today’s ride – the last 15 km are entirely downhill and almost effortless.

From below sea level, we drive up to 700 meters to Dana village and our hotel, perched on the edge of Jordan’s largest nature reserve, a spectacular wilderness of canyons and mountains that rise above the Great Rift Valley.

In the morning, we explore the Dana Biosphere Reserve on foot. This 320 square kilometer area contains four different bio-geographical areas from 1,500 meter high plateaus to desert plains. In between are numerous steep-sided wadis lined with a lush growth of trees and shrubs.

We will take a four-hour hike a through a breathtaking siq* that leads to spectacular views of Jordan’s backcountry.

We again spend the night on the edge of the reserve at the Dana Tower Hotel.

In the morning, we drive to Shobak Castle, a 12th-century fortification built by Baldwin I, a crusader from Europe and the first King of Jerusalem. While our bikes are set up, we explore the walls, archways, and deep stone cisterns of this hilltop fortification.

We begin our ride with an uphill climb. From there, a ridge traverses southward along a wadi and through a section that offers spectacular views of desert mountains to the east and desert plains to the west. We finish the trip with a technical descent to the town of Wadi Musa near the entrance of Petra. We cycle on a tarmac road to the entrance of Little Petra.

We overnight at a Bedouin camp constructed of tents and cots with shared bathroom facilities.

In the morning, we hike to the center of Petra along an ancient Nabataean processional route now part of the Jordan Trail. We hike through a wadi to The Monastery, a massive building-like facade carved into the mountain in the 3rd century BCE and later used by the Byzantines as a church.

Later, we explore the main site of Petra, one of the world’s greatest architectural sites. This vast area, home to a succession of lost civilizations beginning with the Nabataeans, is filled with narrow passages, gorges, and a sophisticated water system. More than half of the building facades are carved directly into the rock along with a vast extent of elaborate tombs, temple architecture, religious places, and copper-mining ruins.

We have the option of climbing a nearby hill, Jabal al-Khubtha to glimpse the renowned Treasury from above before exiting through the narrows of Wadi Muthlim and into the town of Wadi Musa.

We stay at the Edom Hotel.

We drive to the town of Delagha. We ride along an off-road trail through an amazing desert landscape, past scattered Bedouin camps to the old Caravansery of Al Humaimah, an old stopping place on the Spice Route once used by camel caravans. We stop here for lunch. We continue cycling until we reach Jordan’s main north-south road, the Desert Highway.

We put the bikes on the van and drive south to Wadi Rum. This vast desert plain is a UNESCO Protected Area with 12,000 years of human occupation and written about extensively by T. E. Lawrence. Widespread petroglyphs, inscriptions, and archaeological remains are interspersed among spectacular sandstone mountains, natural arches, narrow gorges, towering cliffs, and dramatic cavernous weathering forms.

Our Bedouin hosts will transfer us in their 4×4 jeeps to your luxury tented camp in the desert where the stars will be on full display.

During breakfast, we enjoy the desert morning. We start our last ride of the trip at the foot of the peak of Al Qattar and cross the western edge of the Wadi Rum reserve. We bike on hard desert trails with areas of challenging soft sand. When we reach a tarmac road we head southward toward Aqaba and to the edge of the Red Sea to mark the completion of our cycling.

We have lunch at a popular local hangout in town, then head to the Mina Hotel.

Early morning, we will transfer to Wadi Mujib for an adventurous hike that takes us up through a beautiful sandstone ravine via a riverbed to one of the canyon’s highest waterfalls (18 m). You’ll walk through the clean, shallow river, occasionally crossing waist-deep pools. At several point, ropes and metal ladders have been fixed to the rock to help you climb. At the waterfall, you can swim in the pools beneath the cascading water. We return by the same route and meet our transfer to the Dead Sea.

We stay at the Holiday Inn Resort Dead Sea.

We spend the morning exploring the salt and mud of the Dead Sea. Later we transfer to Queen Alia Airport for departure.

Jock has been leading trips in the United States since he was a teenager.  In 1983, he moved to Nepal to train raft guides, lead river expeditions, and lead treks across much of the Himalayas. For twelve years, he was based in Kathmandu. He now makes his home in Bangkok, Thailand.

Jock is also in demand as a commercial and editorial assignment photographer. In addition to his custom adventures, Jock teaches and leads private photography tours. 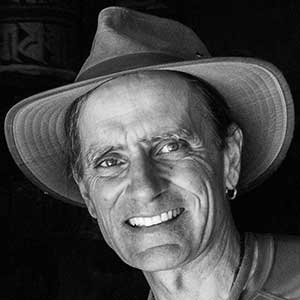 What is not included

4) Upload Copy of Your Passport

Upload Copy of Your Passport